How do hidden spy cameras work? 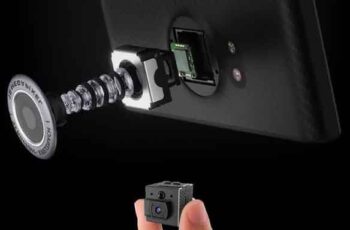 A hidden surveillance camera gives you the ability to remotely monitor your home or apartment through a simple mobile application installed on your smartphone. Hidden cameras are also known as spy cameras and their main purpose is to record people without their knowledge. But how do hidden spy cameras work? Let's find out!


How do hidden spy cameras work?

So how do hidden spy cameras work? A hidden spy camera broadcasts video using wireless transmission to send and receive an image. First, it detects the image through the lens and then transmits it with the help of a radio transmitter in the form of a radio signal on a particular frequency to the device where the image is displayed on the video screen.

When we use the term “hidden camera” it means that the camera is not visible to the subject being filmed. For this reason, these cameras need to be tiny and inconspicuous. If you want to know more about hidden spy cameras and their features, keep reading this article.

The basics: principle of operation

The wireless spy cameras have a radio control, thanks to which they are able to communicate with a wireless router or an Internet box. The camera, therefore, belongs to the home computer network, just like a tablet, computer, and other game consoles. This wireless link gives the user the ability to connect to the camera remotely. In practice, it is usually sufficient for the user to install a mobile application on his smartphone.


Step by step guide on how hidden spy cameras work

When the user is at work, on vacation or traveling, the app connects to the camera wirelessly via the internet connection in your home. Once communication is established, the user consults live the images sent by the camera. It also accesses functions such as zoom, lens shift or night vision activation if your device has them. At the same time, it can remotely control the recording of images captured by the camera, both directly inside the camera (by adding a microSD memory card), and on your phone.

Since the wireless spy camera relies on your home's Internet connection to send images, you cannot connect to it if there is no Internet. The quality of the transferred images also depends on the Internet connection (upload capacity, i.e. data transmission) as well as the bandwidth of the local wireless network.

How a hidden spy camera is composed

Each hidden spy camera consists of these 3 components:

A hidden spy camera can be wireless or wired. Their primary purpose is to capture footage of the area being monitored. The wireless hidden camera transmits a video signal to a receiver where the image is recorded or just displayed. Wired hidden cameras are connected by a cable.

A recording device is used to archive footage recorded by a hidden spy camera. Most recordings are stored on the internal hard drive or micro SD card supplied with the camera.

The monitor is the device where you view recorded video or live video. In most cases, the movie is viewed on a mobile phone or on a PC or tablet.

Hidden spy cameras use wireless transmission to send and receive an image, which makes them easier to hide and convenient to use. Therefore you don't need to have a cable from the camera to the receiver to get an image, but some models come with a cable because they need to be plugged into a power source in order for them to work.

The wireless hidden camera captures images with the help of light passing through the lens. Light detectors only measure red, green or blue light, so all three photodetectors are combined to display a complete image. Some wireless detectors are equipped with a motor and a motion detector, with which you can follow all movements in the area.

All wireless hidden cameras have a built-in radio transmitter that transforms the recorded image into a radio signal on a particular frequency. That signal can only be transmitted to a receiver inside the building. Then the receiver takes the signal and transforms it back into an image.

The receiver has multiple functions, depending on its purpose. If the wireless spy camera wants to continue surveillance, the image is displayed on the video screen in real time, but the image can also be recorded on a specific storage medium or on a PC hard drive. Today, cell phones are most commonly used to monitor hidden surveillance camera footage.

Structurally, the camera lens is a complex system of lenses that are encased in a frame and compensate each other for optical distortion. Collects and projects light energy onto a light sensor to form an optical image.

The main parameter is the focal length (measured in millimeters), which determines the image scale and angle of view. It is the distance from the axis of the lens assembly to focus (the intersection point of the initially parallel rays after passing through the lens). The shorter the focal length, the wider the field of view. The 2,8mm lens provides video surveillance in a sector with a viewing angle of ~ 100º. The more the camera focuses (for example, 8 mm), the smaller the angle of view, but the greater the distance from the observation object necessary for high-quality shooting.

3. How are hidden cameras built?

Most hidden (spy) cameras are built into common use items such as alarm clocks, televisions, cell phones, toys, ink pen caps, etc. They are mainly used for home surveillance, but can also be used for industrial espionage. For example, you will use your hidden camera to take a look inside your house during the holidays to verify that no one has entered. For this reason, spy cameras are built into objects that can easily adapt to the home environment so that they are difficult to notice.

4. How to install a hidden camera?

The installation of a hidden camera does not present particular difficulties; you need to unpack the camera, plug or charge it, choose its location, then turn it on and connect it to your home network. This last step is often the most tedious as you need to connect to the camera interface to enter the WEP or WPA security key of the WiFi network. The intervention of a professional is also recommended if you intend to integrate your camera into your alarm system and build a more advanced security system.

The technical elements of a spy camera

The most common resolutions are:

With the development of digital technologies, the trend towards increasing the number of effective pixels is growing, although high resolution is only relevant for objects where it is necessary to clearly see the denomination and number of a banknote, recognize a license plate at a large distance and constantly resize the image.

Hidden spy cameras can be equipped with one or more audio inputs and outputs, so they are capable of recording audio. Some models have a built-in microphone, but if required, a professional omnidirectional or unidirectional microphone can be connected to each spy camera with audio input (depending on the application).

Hidden spy cameras have an average recording time of 60 minutes. This depends on the capacity of the built-in battery. Some spy cameras come with a cable so they can be plugged into an electrical outlet.

Yes, the hidden spy cameras have a night vision mode which allows them to record even in low light conditions and during the night. The night vision mode is activated automatically when the camera sensors detect a dark environment.

4. How many videos can hidden spy cameras store?

How to manage Chrome extensions, install and uninstall ❯

add a comment of How do hidden spy cameras work?