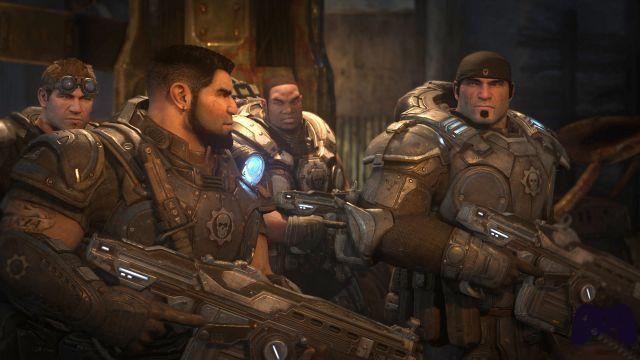 Comes on Xbox One the definitive edition of Gears of War. The first chapter of the Epic Games saga returns polished by the work of The Coalition, (the former Black Tusk Studios, within which it militates Rod Fergusson, executive producer of the first 3 chapters), with a series of new contents at a “budget” price of € 39.99.
It was the end of 2006, Xbox 360 celebrated its first year of life and was preparing to receive one of the most anticipated exclusives of the moment: Gears of War. The Epic Games title born from the mind of Cliff Bleszinski, was a turning point for the Redmond home console. Not only did it represent one of the best titles of the period, technically one of the most impressive graphics on consoles of the moment (the The Order or Ryse of the time) but managed to bring a breath of fresh air to the action genre, with its frenetic action, and (above all) its distinctive trait, the roofing system, so much so as to be copied and abused by an infinity of other titles and clearing the term "a la Gears of War". After so many years, 9 to be exact, we find ourselves once again putting our hand to one of the most satisfying adventures in the history of video games, a real milestone of the genre, which in this revised and corrected version will be loved today as then.
To pass the wait for the fourth installment of the series coming next year, here is the review of Gears of War: Ultimate Edition.

Gears of War will see us engaged in a suicide mission, the purpose of which will be to stop the advance of Locusts, an alien species that inhabits the depths of the planet Sera, ready to destroy humanity and all its colonies. Taking advantage of a moment of human weakness, intent on making war to gain dominion over the imulsion, an invaluable source of energy, the Locusts advanced their attack in the Day of the Emergence, bringing death and destruction to the entire planet, thus starting a bloody conflict. In the game we are going to impersonate the iconic Marcus Fenix, apparently the classic space marine full of brawn and little brain that, sentenced to 40 years in prison on charges of high treason, will be released and restored to service as the last hope of the COG (Coalition of Organized Governments) to end the Locust problem. At the head of a small handful of soldiers, the Delta team, Marcus will be able to count on his friend's confidence and firepower Dominic Santiago and of the other comrades, the cynic Baird and the stainless former star of the Trashball, Cole train.

Another strong point of Gow is the masterful co-op mode

The story of the first chapter of Gears of War certainly did not shine with fantasy, on the contrary, it rested its foundations on the classic clichés of the sci-fi genre. He had, and still has, on his side a great atmosphere given not only by the imposing graphic detail, which he put in his own, but also by the excellent cinematic cut and direction that marked every single action scene. The construction of a title like Gears of War owes a lot to the jets that make up the game. Starting from the choice of the shot, the same one used by Resident Evil 4 (also a revolution in the third-person action adventure genre) which, positioned very close to the back of our character and decentralized with respect to the image on the screen, allowed certainly immersive solutions and allowed to perfectly marry the action and the system of roofing. The variety of situations then manages to always keep the player's attention high, who in the 7/8 hours necessary to complete the adventure is catapulted into the heart of the action, with moments from almost horror colors to Alien, between plays of light and well-positioned jumpscare to then explode in choral phases where our team is busy to take down the hordes of locusts.

There are many high passages in the game, such as the cart ride in the Imulsion factory, the face-to-face with the imposing Corpser, a giant spider used by locusts for their attacks or even the nocturnal escape under the attack of the Krill, flying creatures ready to kill us at our every false step. Another strength of Gears of War then is the masterful 2-player cooperative mode which allows you to play the game, at any time, with a friend (or a stranger) via Xbox Live. The second player will go to impersonate Dom, and there will be many moments in which we will be separated, forced to act on different paths and often collaborate by covering each other's backs or by activating switches to allow the friend to continue and do the same. The solution then adopted for the drop-in / drop-out it allows situations of continuity that do not affect the action. This edition of Gears of War arrives also enriched with the extra levels that appeared in the PC version and never made it to consoles. But not only that, during the game it will be possible to collect the COG platelets scattered in the levels which now, if you collect all of them, will allow you to unlock and read 5 special volumes of the Gears of War comic, in which facts and background are told that expand the fictional universe of the saga.

Microsoft and The Coalition "disappoint" in part those who expected a remastered of the first 3 chapters of the Gears of War series in a similar way to Master Chief Collection. To be forgiven and riding the wave of backward compatibility, the Xbox 360 versions of all the chapters released, from the progenitor to the Judgment, will be released free of charge to owners of the Ultimate Edition for a limited time. For details and methods, find all the information at the following link

The simplicity of the controls helps you focus on the action

The merit of Gears of War was to bring a visually impressive game to the screen but equally beautiful and fun to play. The simplicity of the controls, as well as the cleanliness of the on-screen hub helped to focus attention on the action and gameplay, also easy to learn but full of nuances and possibilities. The biggest news, at the time, it was represented from the roofing system, which allowed, by pressing the "A" key (multipurpose button also used for running if pressed fully and for evasive somersaults by double pressing), to attach yourself to a shelter using it as a "shield" from which to concentrate their firepower and respond to enemies. This led to a more reasoned action, where running head down towards the locusts meant only death, although the difficulty of the game, at least at the Normal level, was not that challenging. On the other hand we have the locusts, which although they did not shine in terms of cognitive qualities, however, they knew how to organize themselves and devise attack strategies worthy of the name, and then became ruthless butchers in the Backbreaking Insane difficulty level, where a few hits mean instant death and coverings represent salvation and our only ally. In the defensive phase then a range of possibilities opens up to the player: it will be possible to shoot aiming at our target by concentrating the fire or shooting blindly to disturb the enemy. We will also be able to move, selecting one of the possible directions and choosing the next destination that will be indicated on the video by an icon, which will allow us to pass without losing the defense protection.

1 2
Do you want to be a video game expert and know all the tricks, guides and reviews for your video games ? Holygamerz.com is a group of video game fanatics who want to inform you about the best tricks, guides and tips. We offer you the best information to be a reference in gaming, so here you can find guides, tricks, secrets and tips so you can enjoy your games to the fullest. Are you ready to get all the achievements of that game that you resist so much? Enter now and enjoy your favorite video game to the fullest!
One Piece: Burning Blood preview ❯

Wasteland 3, Colorado in the palm of your hand | Review

Add a comment from Gears of War: Ultimate Edition review