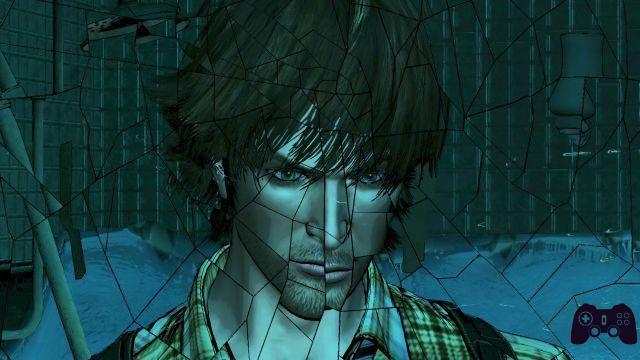 D4, o Dark Dream Don't Die, is the new exclusive Microsoft products available Xbox One from 19 Settembre. Announced atE3 2013, D4 had lost all its tracks until the Tokyo Game Show 2014, where Swery65 and its Access Game confirmed its imminent release. Let's see if this long wait was worth it.

A jump into the past

D4 is a journey into Swery's creative madness

David Young, this is the name of our beloved protagonist. A former Boston police detective, his wife who died a few years earlier and a killer on the loose who continues to spread terror. His life is not simple, which, worn out by remorse and doubts, constantly relives the anguish of that day, with the always vivid presence of his Little Peggy. But the loss of his beloved wife also brought David a precious gift. After meeting with D, the enigmatic killer, and the bullet ended up in his skull, David will be able to relive past events using some objects called Memento. Thanks to this skill, and with the help of his closest friend and former colleague Forrest Kaysen known as Teddy (recurring character in Swery's games), our David will try to answer a question that has haunted him since that night: who is D?

D4 is a journey into Swery's creative madness. For those unfamiliar with this Japanese game designer, he deserves the credit for having created the bizarre Deadly Premonition, which very explicitly gave us a survival horror that drew more than one inspiration from Twin Peaks. Here, too, his touch is palpable. Every moment within D4 is a continuous discovery, and we, in the role of players / spectators, will be sucked into a whirlwind of surreal events that will drag us into a world made up of ambiguous and disturbing characters, black humor and many over the top situations. We are also captured by the strong cinematic cut of this adventure, which by choosing the episodic form of the TV serial, exploits a direction based on the use of split screen, fragmenting what happens on the screen, offering us the action from multiple points of view. There will be elements such as opening themes with the roundup of all the protagonists of the current episode or the inevitable cliffhangers that will leave us with bated breath, waiting to learn more and begin a new chapter of this fantastic story.
D4, in terms of narration, has no flaws. Everything is perfectly packaged with a continuous crescendo of events and situations at times exaggerated, with a cast of beautifully characterized characters and a protagonist, David, deep and multifaceted who with his monologues, inner reflections and his gestures reminded us a lot from near the other little boy of Swery65, Francis York Morgan by Deadly Premonition.

the revived Kinect in D4 finds a precious ally

Despite the approach as a graphic adventure, approaching as a result the latest products Telltale Games, D4 boasts a decidedly fast pace, in which narrative and action come together, creating a playful hybrid with interesting implications, going to revive even the revived Kinect, which after being put aside finds a precious ally in D4.

Just through Kinect, we will be able to use our hands as pointers during the investigative phases, just point the screen and move to the point of interest, closing the palm of the hand to activate the event. David's movements will also be managed through special icons, while to manage the view and find all the interactive elementsi just slide from right to left (or vice versa) in front of Kinect's watchful eye to rotate the camera 90 °, on the other hand, by leaning with the torso to the side, we will be able to widen the field of vision to bring to light any objects hidden from our view. David will also be able to rely on another power that allows him to highlight all the points on the screen with which we can interact. Just put your hands to your head to bring out the objects of interest that we will need to continue the adventure. Every action we take, every object analyzed or interaction with the environment will consume the Force, regulated by a bar that, like that of the energy, once consumed will immediately lead us to the game over. Exploration will be a key ingredient of D4, as it will provide us with valuable insights into our investigation. To entice us to analyze anything on the screen we find a system of rewards through credits, which if accumulated can be spent to buy food to recharge the Vigor, extra content or new clothes for David and the other protagonists, which will not have a single aesthetic value but they will also affect some features.

But D4 will also be action and there will be more than one occasion in which we will have to roll up our sleeves and face eventful situations, be it a clash with the enemy on duty or simply one of the many crazy sequences. In full QTE style we will have to replicate the geastures on the screen trying to get the maximum of synchrony, and therefore a better evaluation.

While the Kinect turns out to be a perfect control system for this type of production, the downside is a certain fatigue that comes from prolonged use in the game. It must be said that the relative duration of these first two episodes (three if we add the prologue that will serve as a tutorial to the commands) mitigates this phenomenon, but even after playing the first chapter it will not be so strange to think of switching to the more classic control system via pad. Here we find a mapping of the commands designed to replicate the movements of the Kinect, making extensive use mainly of the two analog sticks, especially during quick time events. Here too it is right to make a clarification, as turning to the pad after passing by Kinect, the sensation will be of a certain woodiness in the control system, losing a bit of identification, with the result that both will be well usable without being able to be better than each other.


Kitsch is the new black

If the playful side of D4 shows itself on high levels, the technical side deserves more than a clarification. Style undoubtedly prevails over technique, where a fairly marked cell-shading tries to mask a graphic lack of a clearly low-budget title that remains graphically anchored to the last generation and not without problems, such as graphic glitches or a conspicuous tearing during the most chaotic scenes or movies. But given the general quality of the title, the almost parody dubbing or the music that accompanies David throughout his adventure, we can safely dismiss any worries, enjoying one of the best experiences of this kind in recent times.

This D4 review is based on the first 2 episodes released. To complete this first part it will take a few hours, 4/5 depending on how much time you will spend exploring. Each episode also offers secondary missions to be completed that will enrich the already complex story that moves the game, collectibles to collect or mini-games proposed by a disturbing giant, all found that will significantly lengthen the duration of D4 in case you decide to complete it. in all its parts, perhaps obtaining the maximum of synchrony in the various chapters or choosing alternative answers during the multiple choice phases to see what happens. Verdict 8.5 / 10 Aaaaavaaaaant-Gaaaaaardeeeee Comment Swery65 gives us again a unique, atypical, strange experience, but at the same time its uniqueness is its strong point. The genius of the Japanese game designer is breathed in every moment within the world of D4, which in this new adventure reconfirms his ability to tell a story, moving away from the classic narrative schemes and taking risks, succeeding in the task of creating a memorable story. . Given the price of these first two episodes, € 14.99, we would like to recommend D4 to all Xbox One owners, who can thus enjoy one of the most interesting graphic adventures of recent years. Now only one doubt grips us: when will the new episodes arrive? Because we, we were literally struck by the ending of D4 that we are no longer in the skin to know how it will end. Pros and cons ✓ The genius of Swery65 in all its glory
✓ Optimal use of the Kinect
✓ A stylish audiovisual experience x Graphically old
x Unfortunately it ends soon
Do you want to be a video game expert and know all the tricks, guides and reviews for your video games ? Holygamerz.com is a group of video game fanatics who want to inform you about the best tricks, guides and tips. We offer you the best information to be a reference in gaming, so here you can find guides, tricks, secrets and tips so you can enjoy your games to the fullest. Are you ready to get all the achievements of that game that you resist so much? Enter now and enjoy your favorite video game to the fullest!
Guides How to unlock all tools - Animal Crossing: New Horizons ❯

Review Atelier Lydie & Suelle: The Alchemists and the Mysterious Paintings